Since the recent(ish) announcement of Google Data Studio 360 (Google’s answer to Tableau), we wanted to see where Data Studio 360 will fit into the mix by trying to compare what little we currently know about it with other data visualisation tools that are already on the market. 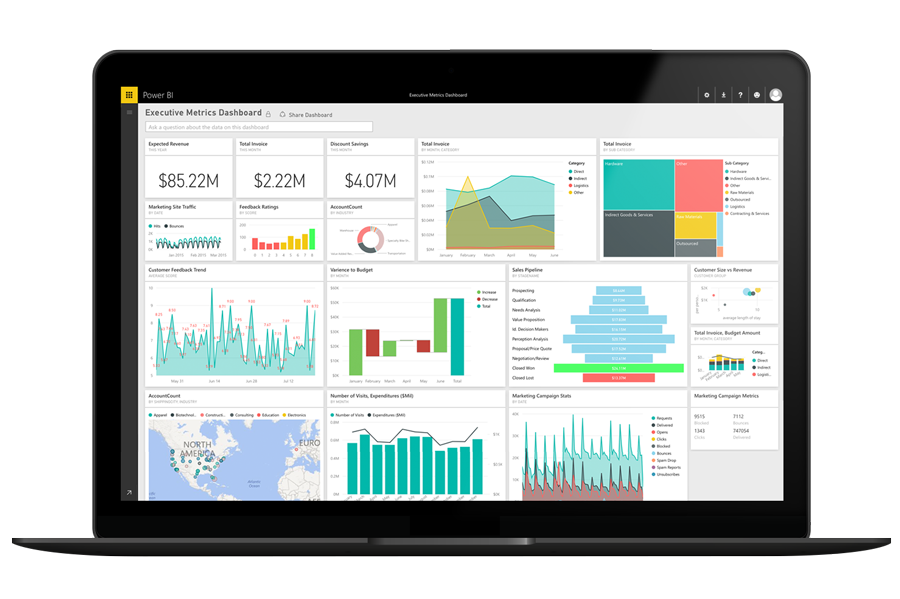 It has an impressive number of API connections (Facebook, MailChimp, Stripe, Zendesk, R, etc.), integrates with Excel, can scrape data directly from a web page, connect to a wide range of databases (SQL, mySQL, Access, PostgreSQL, etc.) and most importantly can pull in all available Google Analytics data.

The basic setup of Power BI is to compose a Dataset from each of the different data sources, then to build a Report from these datasets. Each report is a fully dynamic and responsive visual ‘dashboard’ which can consist of multiple tabs/pages. These Reports contain a collection of visualisations from data tables to data filters/slicers to graphs. Any of these visualisations from any Report can then be pinned to a Dashboard. This is a great way to combine multiple Datasets together in one visual Dashboard, and each of the widgets link to the underlying Report which can be used to drill down into the data.

Now, the really interesting functionality comes into play when a Dashboard is set up. Each dashboard can be shared with each member of the team/business, and they can view the visualisations even if that particular user doesn’t have access to the underlying data. For example, if I created and shared a dashboard based on Datasets from multiple different GA Views, my team can then see the populated Dashboard and Reports even if they themselves do not have access to GA account.

I have to say that the pricing was a big appeal – in so much that is is free to get up and running! With the free package, you can create and share Dashboards and Reports, and have a data capacity limit of 1GB per user. What I have found is that each Report you set up is ~ 1MB, so that means you can set up roughly 1,000 Reports which could power many many Dashboards! After a few weeks of usage, I opted in for the paid package at a whopping £6.20 per month… The only reason for this was so that we could create something they call ‘Content Packs’. These are a way to bundle a number for Datasets, Reports, and Dashboards together to then be shared. For example, I can then create a Content Pack for a client and share this amongst their staff all in one click. It also makes it more manageable from an agency/consultancy perspective in terms of managing lots of Reports and Dashboards for different clients. It also means that the client don’t need to sign up to the paid Power BI package!

We only need a single paid user licence to do this, so it works out very reasonable indeed!

There are many features that I haven’t covered (or if I have, then not in much detail) that we will revisit in the future. However, the last snippet of nerdy-ness I want to mention is that it comes fully cross-device compatible out of the box! There is a desktop app, Windows 10 app, mobile app, and is web-based.

Just to recap, comparing to the yet unreleased Google Data Studio 360, as it stands it is far more powerful. I don’t know much about Data Studio 360 yet except for the pre-release tech demos, but it feels that Power BI has got the edge mainly because it has been out for a full year longer. Let’s see what Google have to say…

(Check out the Power BI blog for all news and feature announcements. Believe it or not, it’s actually quite useful!)

This is the second of a series dedicated to introducing you, faithful reader, to the wonders and delights of Google…
Read the opinion

This is part 3 of a semi-regular series, dedicated to reusable GTM solutions for scenarios or issues we’ve encountered more…
Read the opinion